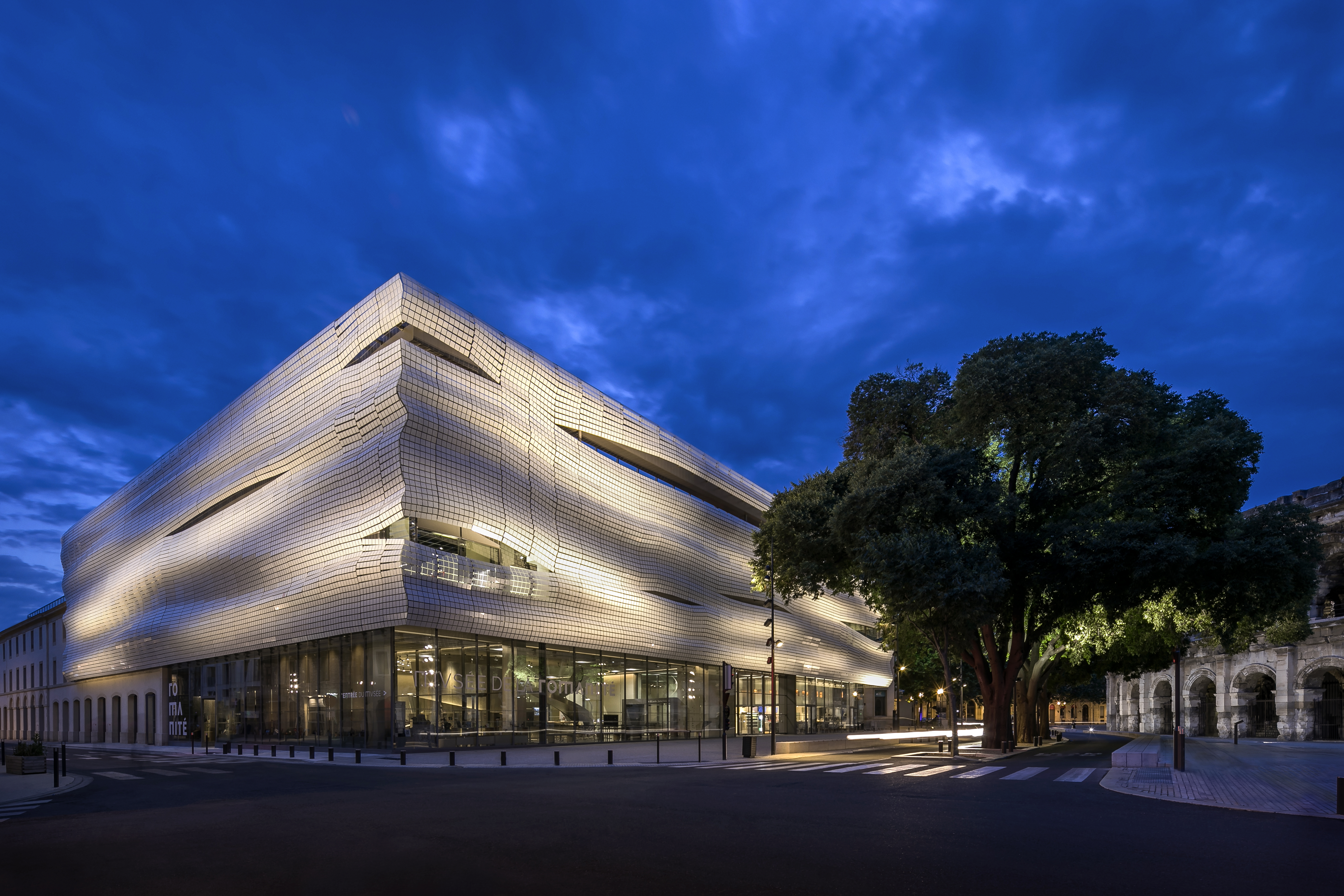 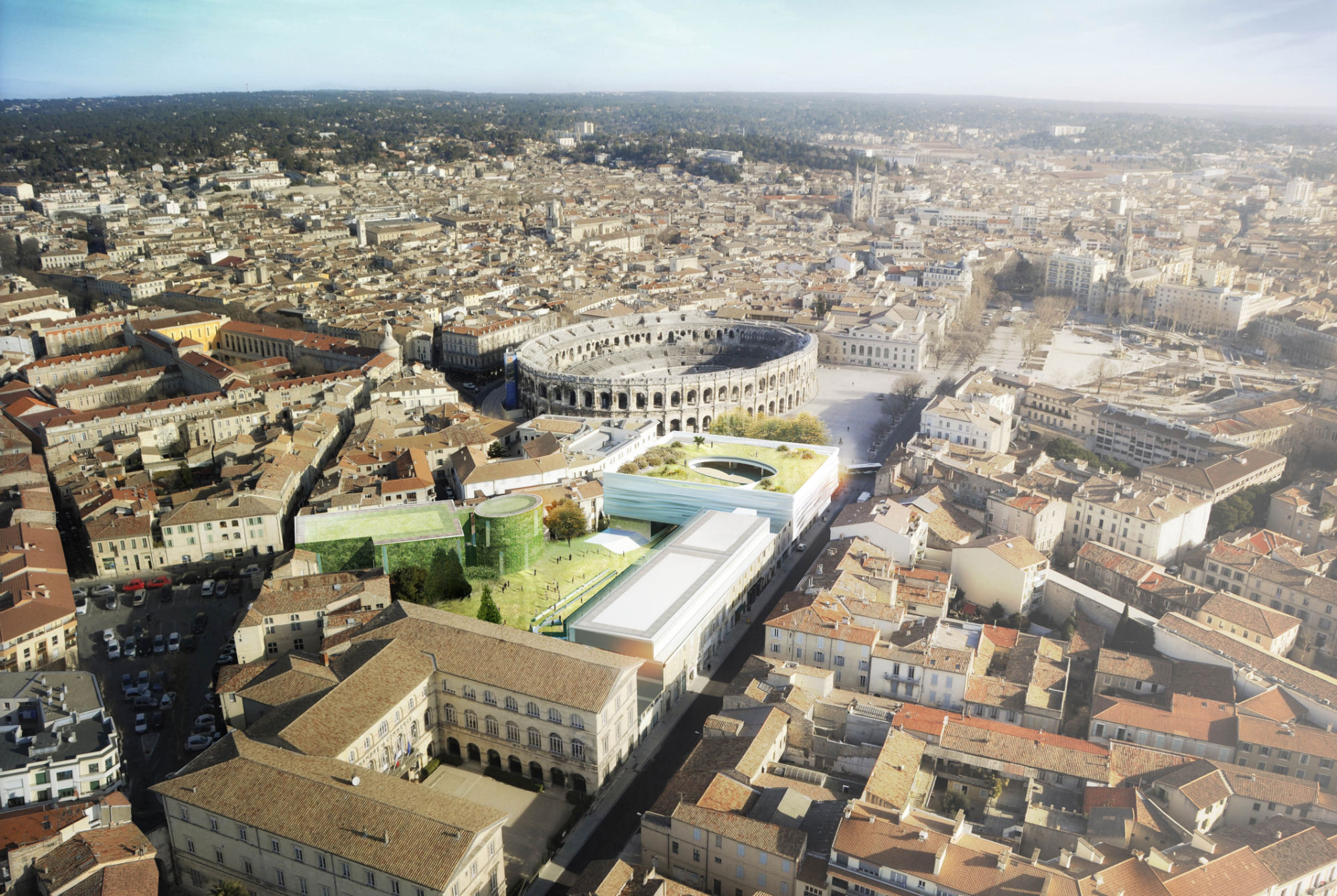 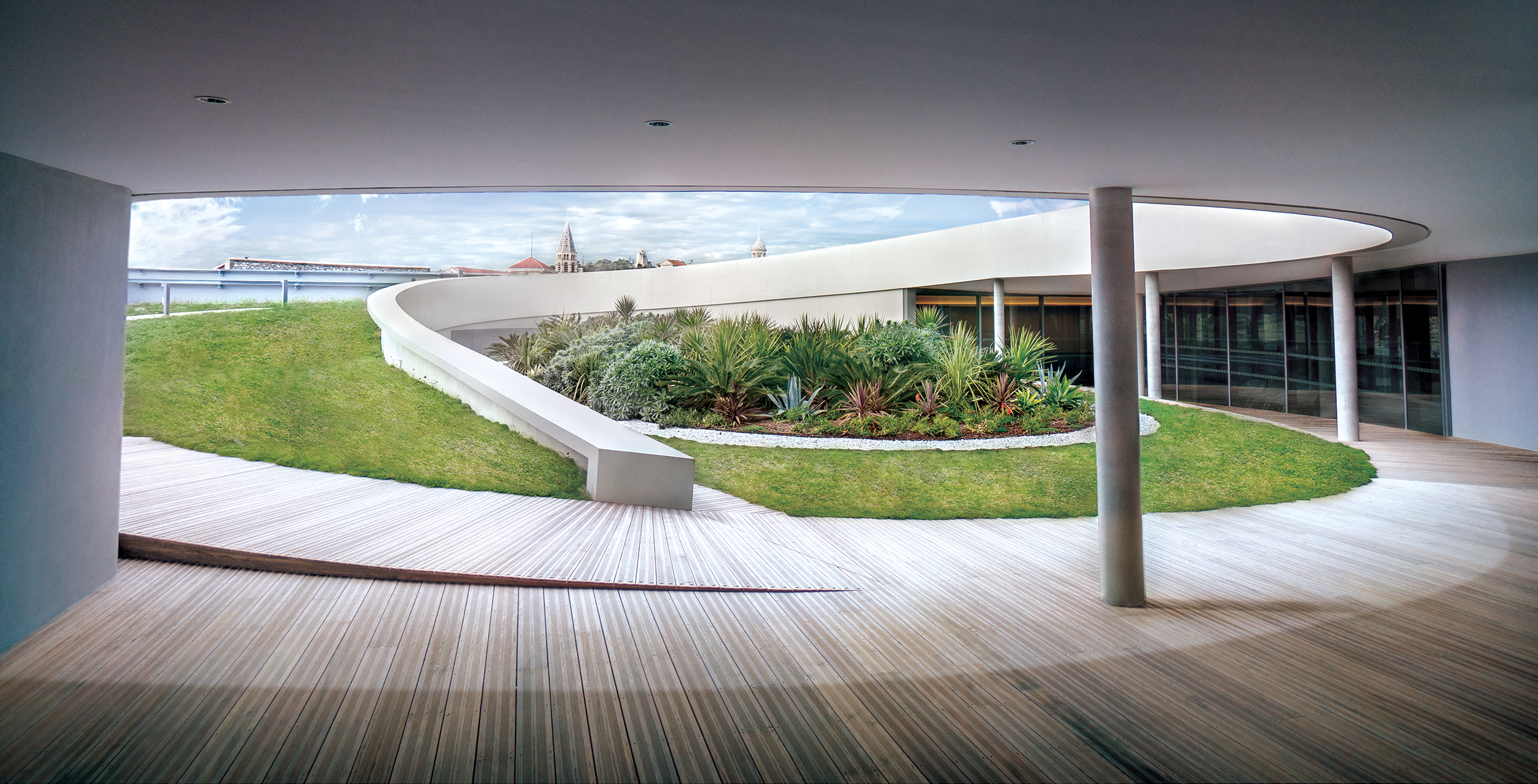 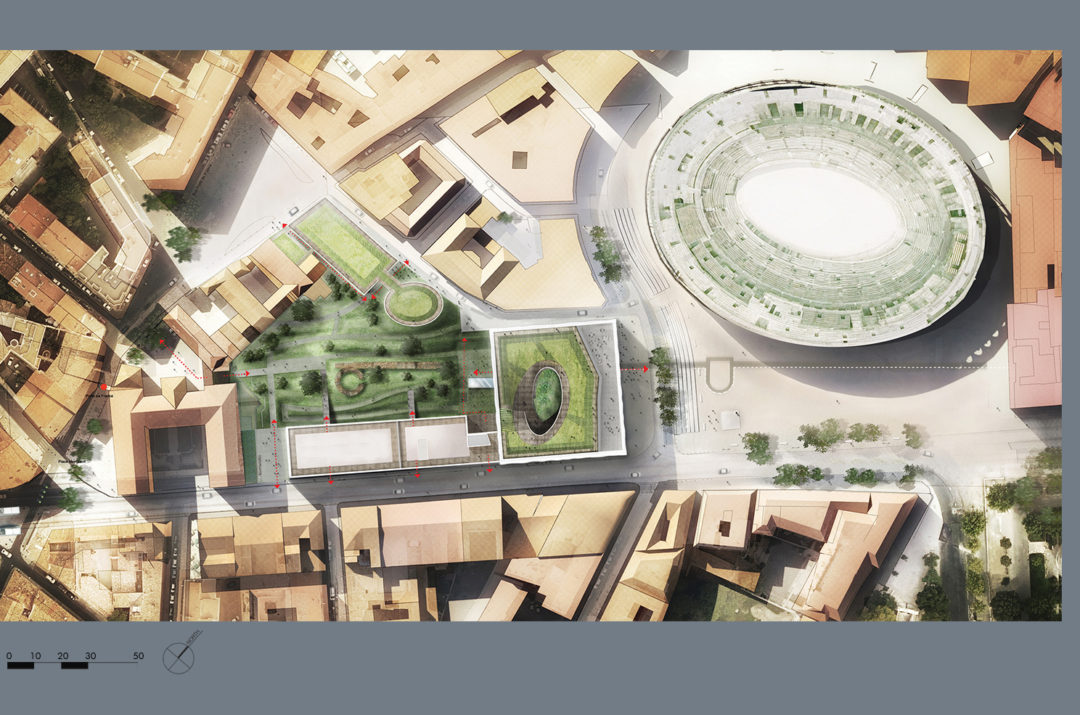 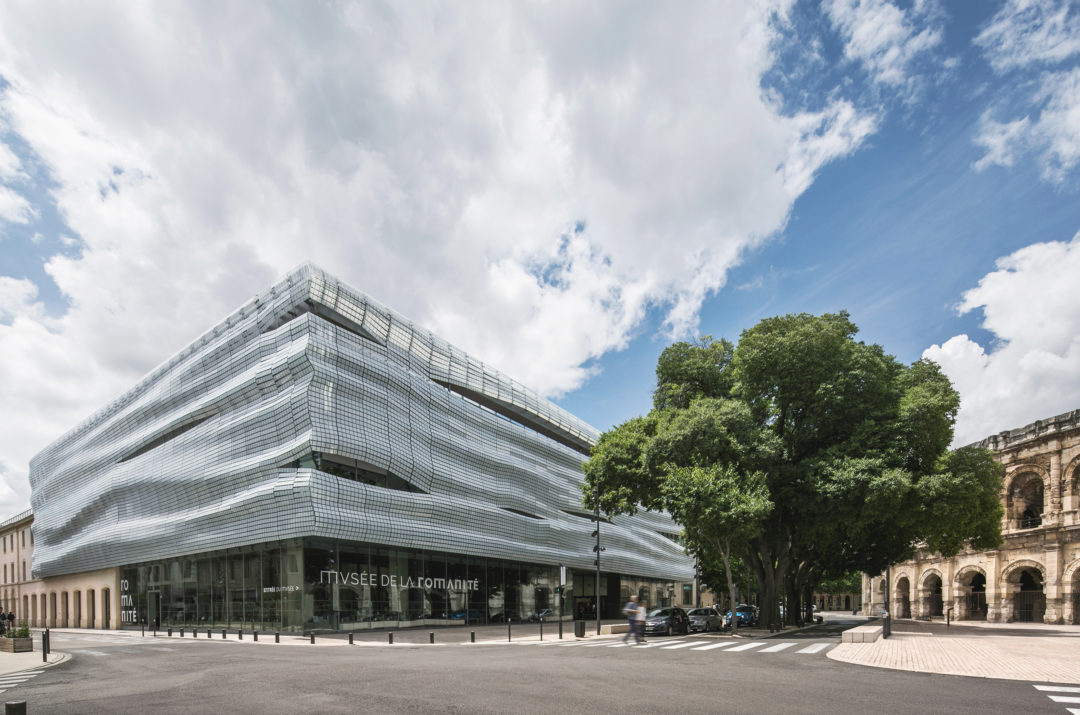 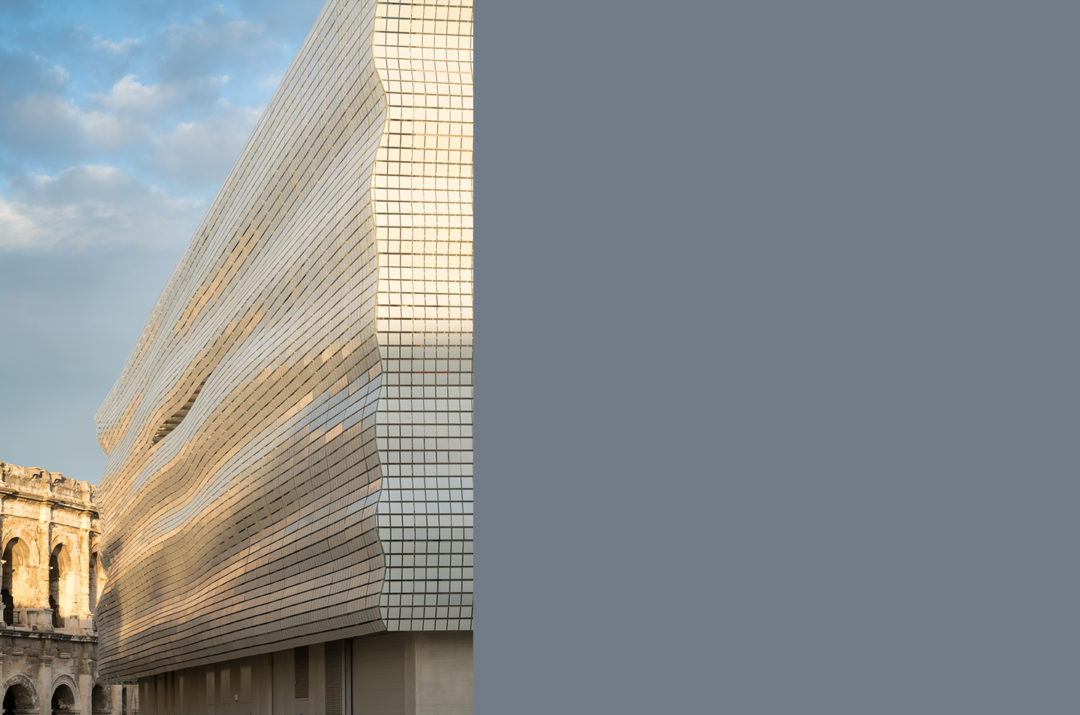 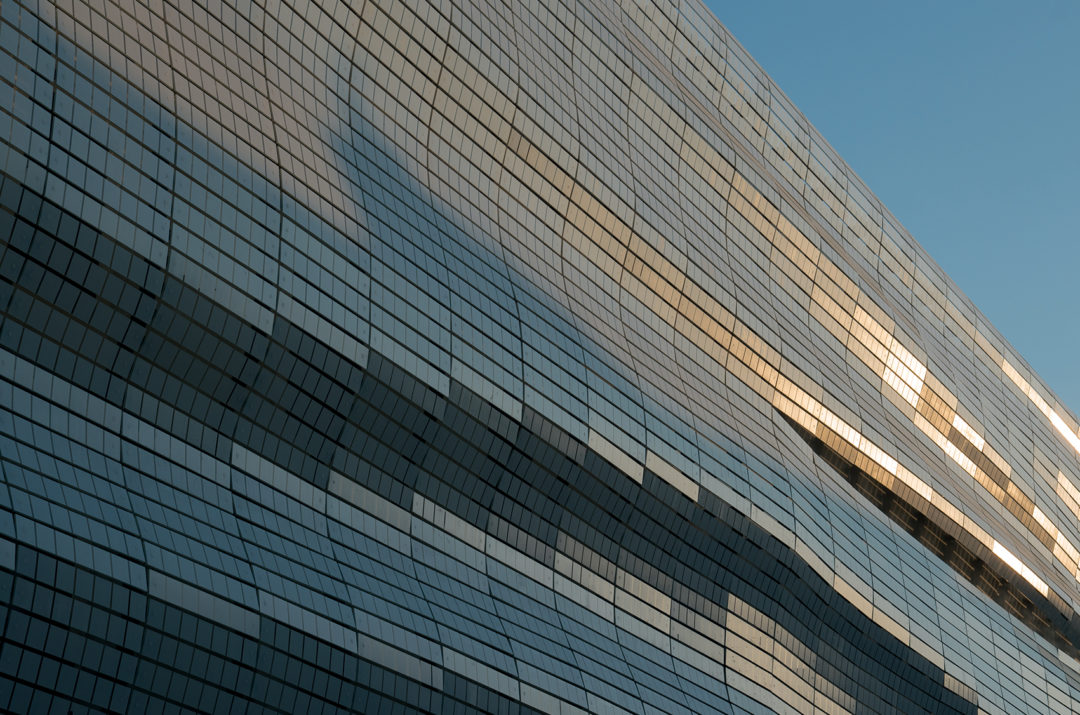 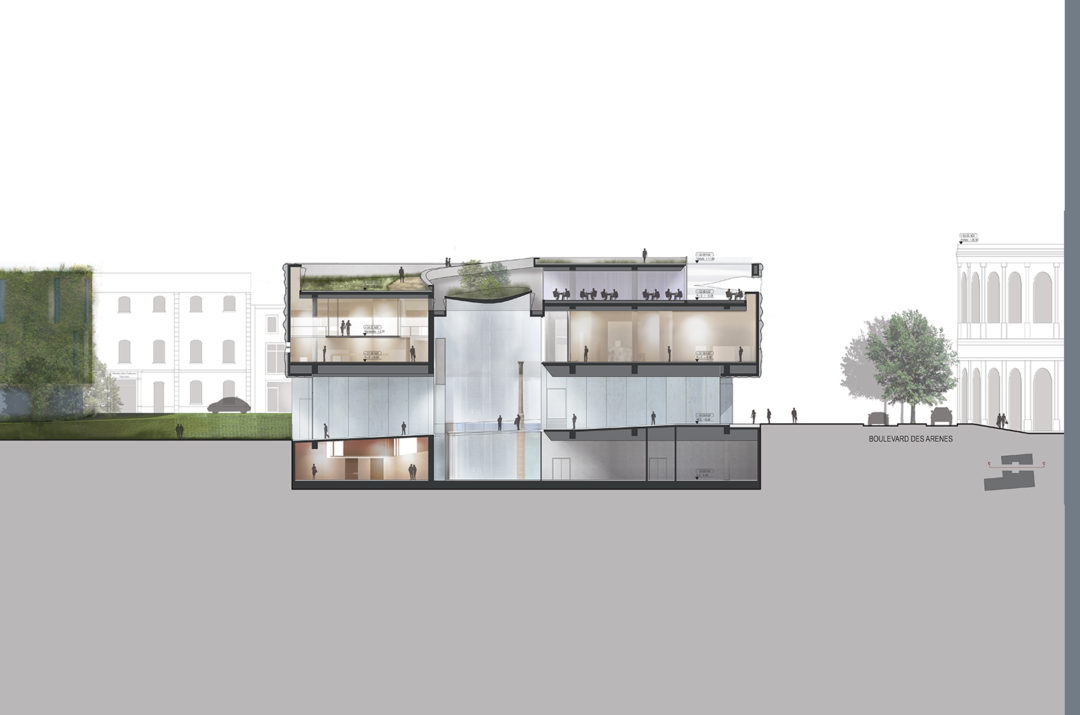 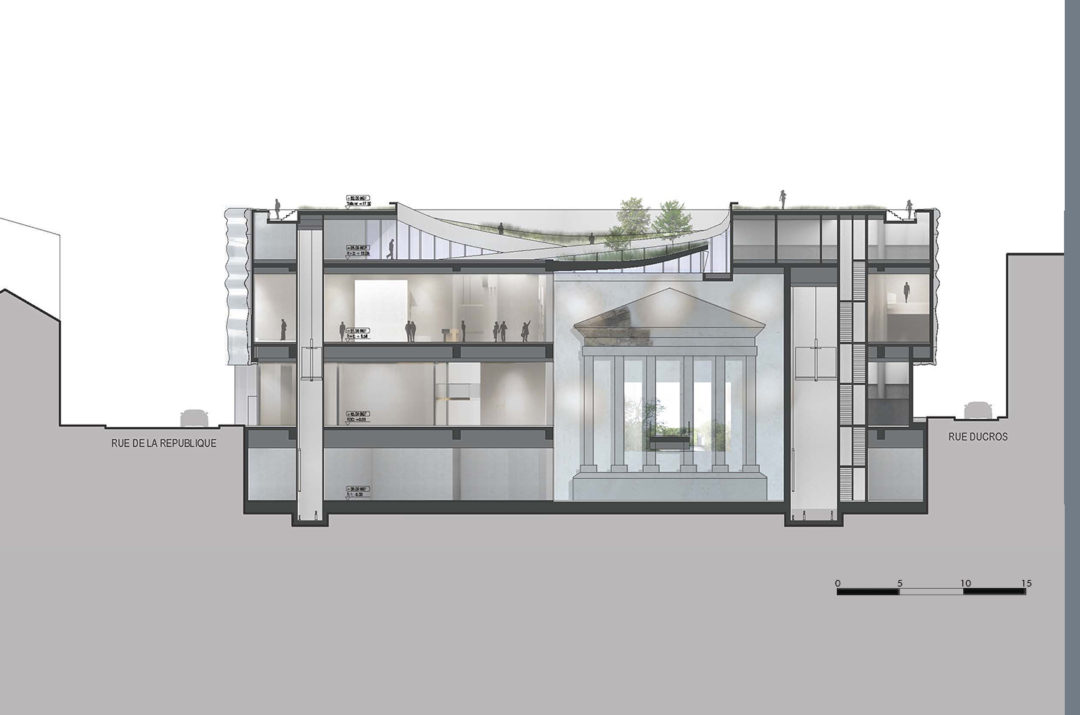 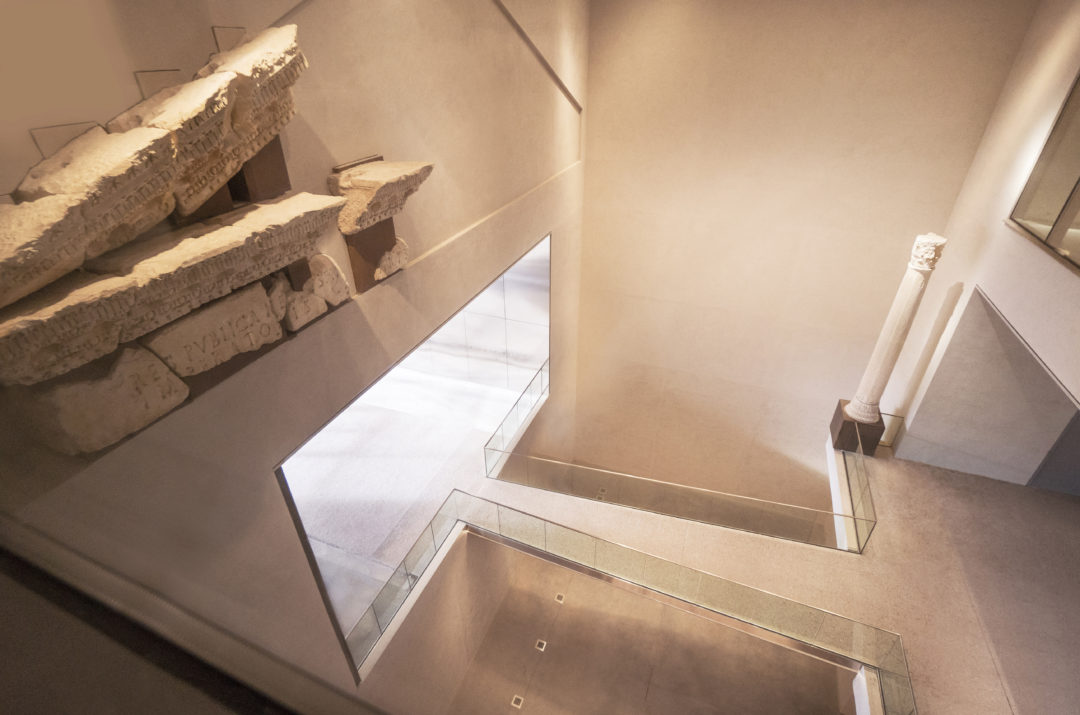 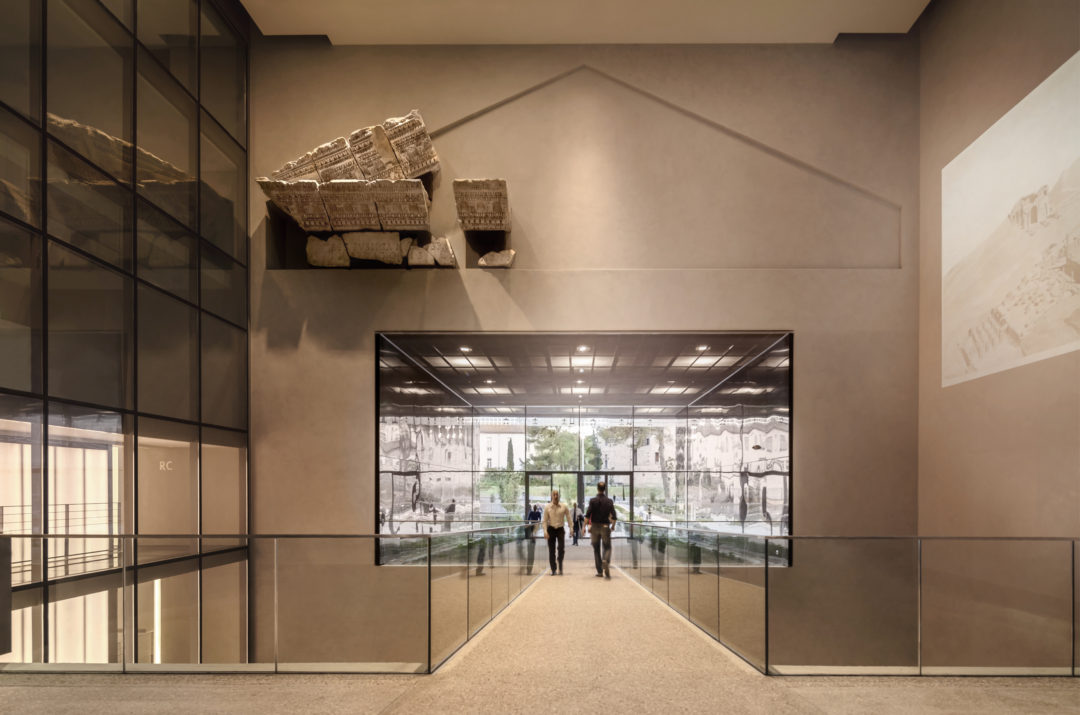 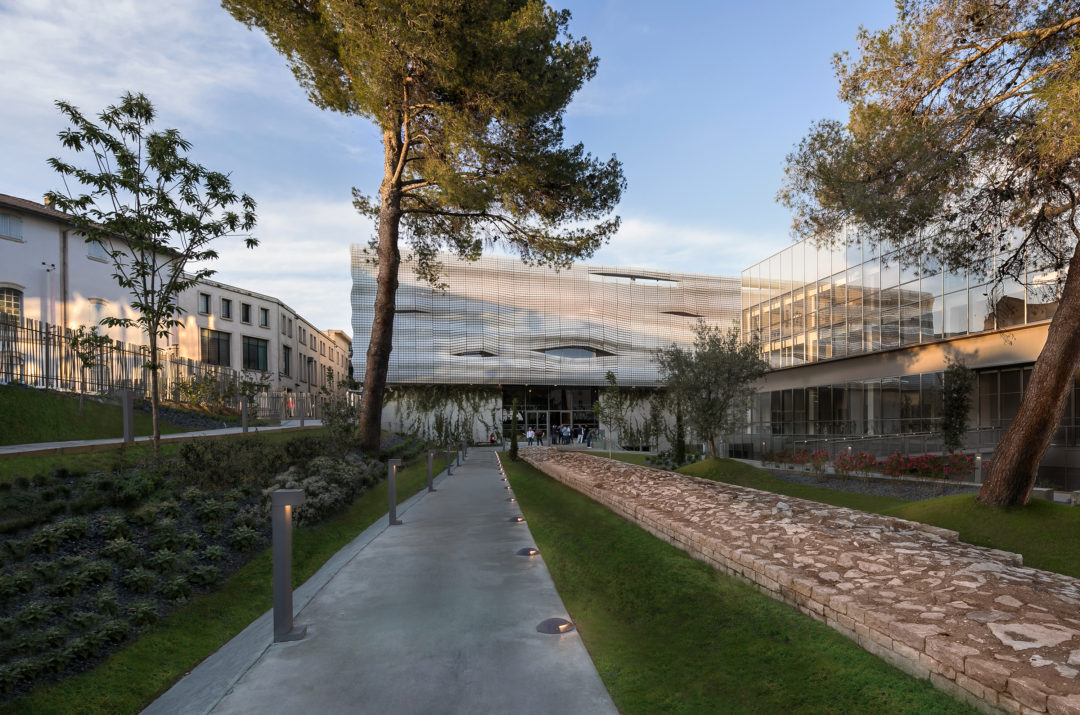 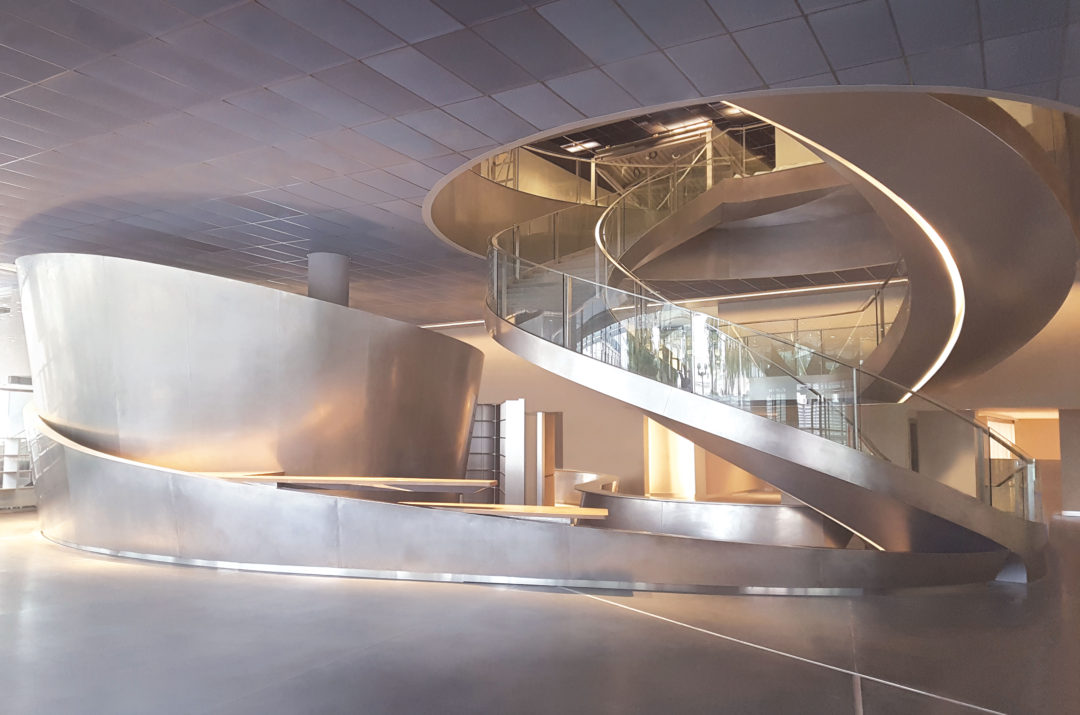 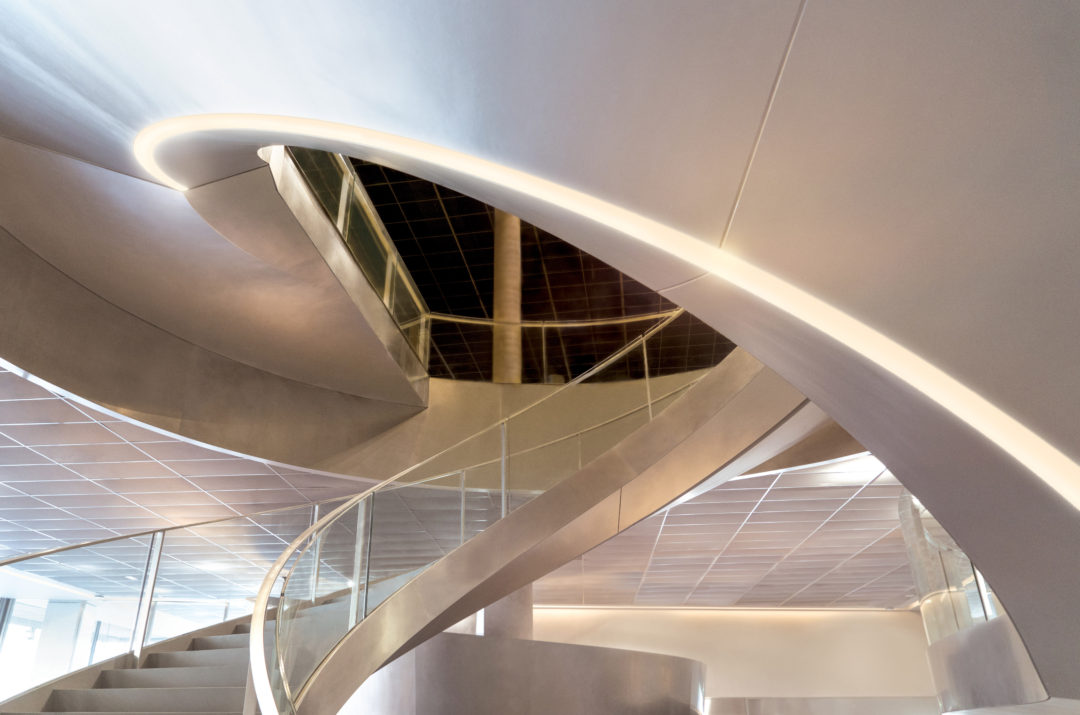 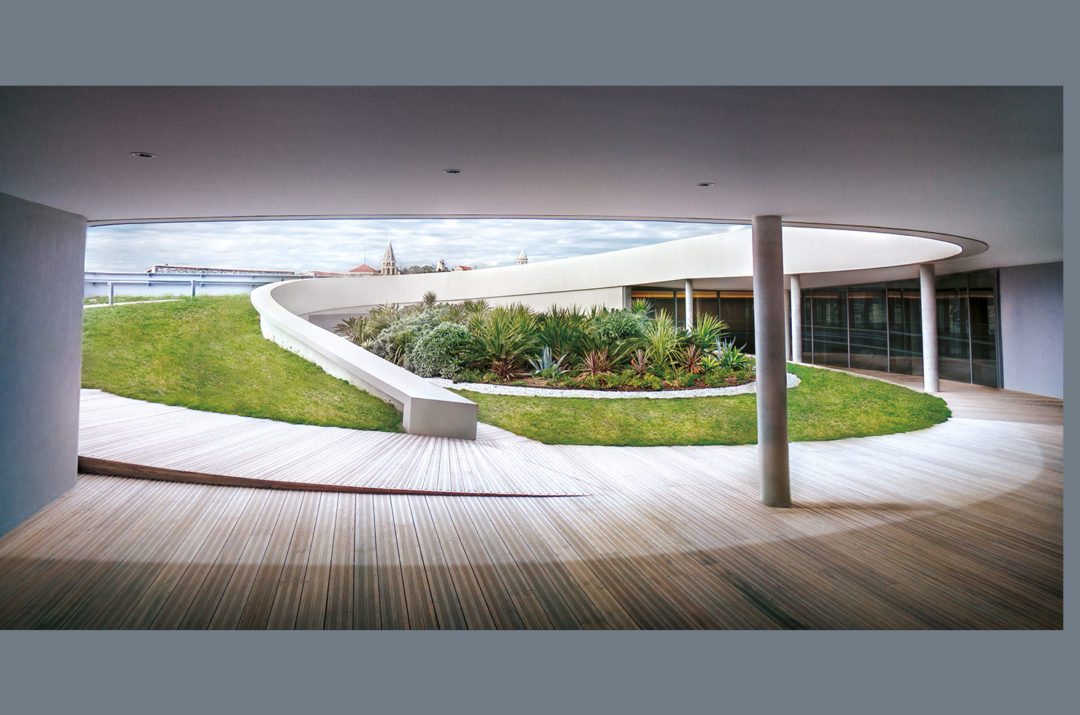 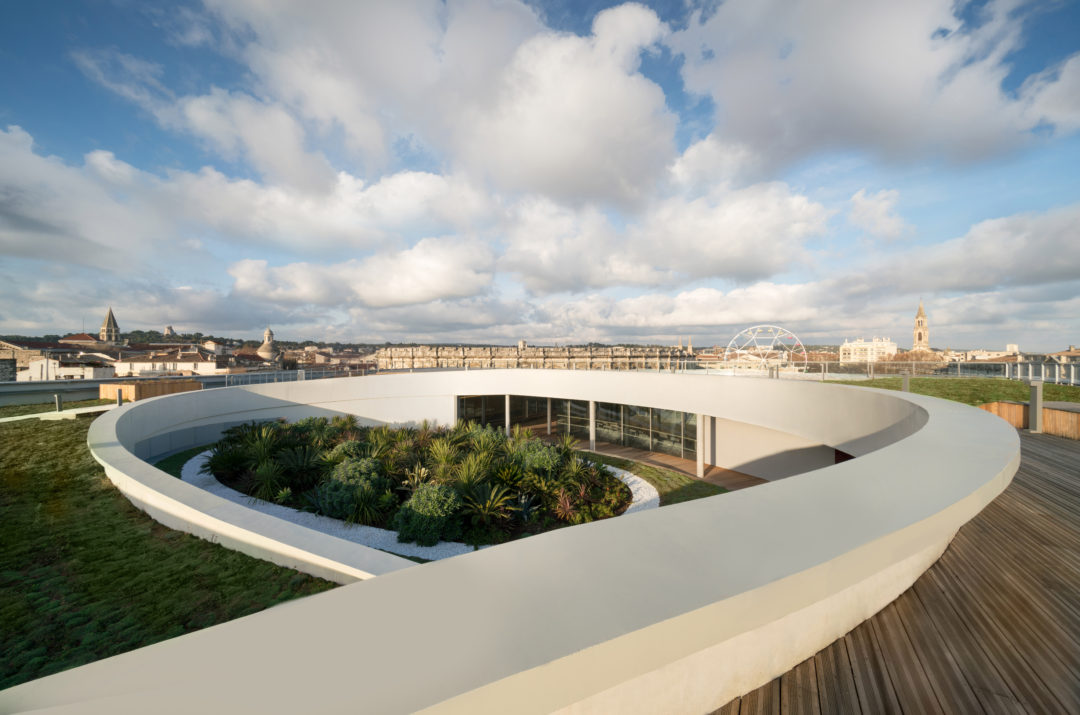 The Musée de la Romanité establishes a strong architectural dialog with the Roman Arenas, from which it is separated by over two thousand years of History. Bypassed by the vestiges of the Roman rampart, it takes place on the backbone of the site, on the old limit that used to separate the medieval town from the modern city, where more than twenty centuries of urban strata and architecture are overlaid.

The dialogue established is expressed through a play of opposition and complementarity. Facing the mass of stone and the magnificent design of the vertical arches that Rome has bequeathed, the building radiates in a clear, luminous presence, a fluid and diaphanous contemporary architecture whose horizontal drapes seem to levitate on the site and over the archaeological garden. In front of the Palace of Justice, the Museum frames a new vision of the square and the curve of the Arenas in a respectful and exceptional way.

Composed of 7,000 sheets of translucent glass, the facade forms a flexible drapery that combines modern transparency and the tradition of a Roman major art form, the mosaic, thus evoking a central element of the museum’s collections. The reflections and ripples of this glass mosaic evolve according to the different times of the day. Work within work, the facade is animated by kinetic reflections, with subtle variations according to the angle, inclinations, hollows and bulges, which accentuate its movement and constantly metamorphose it over the hours and seasons, creating a dialogue with the city by reflecting its colors, its light and its surrounding life.

The building and the museographic path are organized around an interior street that follows the rampart of Augustus, first Roman emperor. Accessible to all, this public passageway creates a visual openness and connects the square of the Arenas with the archaeological garden. At the center of this passage, a 17 meter in high atrium reveals a scenography of the fragments of the “Source”, inviting us to discover the museum.

The upward itinerary through the collections ends on the roof terrace, a belvedere over Nîmes and its 21 centuries of History, with the Arenas in the forefront and in the distance the Magne Tower, vestige of the ancient Augustan enclosure. A public space accessible to all and a meeting place, this high square allows the urban space to enter the museum.

Design of the new master plan of the Grill district. Construction of the « Musée de la Romanité », the archaeological garden and a congress center. Museography.